Archeologist Maurizio Rossi has been directing digs for 20 years: here’s what he found

Once upon a time, there were mines. They were being exploited before the arrival of wool, between the late Middle Ages and the 19th century, when the Biella area was still in search of its vocation. This is what we know from the Upper Valsessera geo-mining park, which has been studied for nearly 20 years by a team of experts who have conducted digs all over Oasi Zegna. Digs that can be visited by anyone keen to delve back into history.

Maurizio Rossi, you’re the archeologist who directed these digs, in various campaigns between 2002 and 2019. Mines too are art? What do you think?
"Absolutely. The digs – promoted by Comunità Montana, the local archeological authorities and the University of Turin - have brought a whole heritage to light.”

What do they tell us?
“That Valsessera, and the mountains of Piemonte in general, are not just natural spaces, as you might think. On the contrary, they’re interesting because they’re an environmental historical heritage. Human activity has produced so many changes to the natural environment that – it’s said – there’s not a stone in these mountains that hasn’t been moved by man at least three times.” 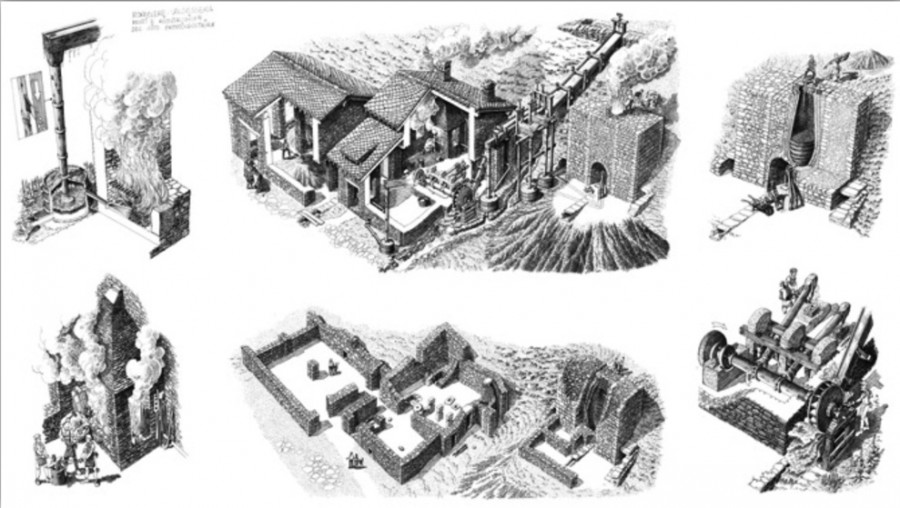 Graphic reconstruction of the Rondolere archeo-ironworks site (drawings by F. Corni)
And what do they say about the territory’s industrial history?
“That the Biella area experienced a major industrial development based on wool, which brought great satisfaction. But prior to that, thanks to the availability of water and wood, the folk in these mountains tried other things, such as mining. They did this from the late Middle Ages on, but above all at the end of the 18th and beginning of the 19th centuries, when mining was carried out more extensively. The main mine, the Argentera, has one kilometer of tunnels.”

Can you visit them with a guide or on your own?
"First of all, the mines themselves are absolutely not visitable, above all for safety reasons. The whole area has info boards explaining the nature of the old mining sites and various excavations and are sufficient for having a look round on your own, but you can also engage a guide if you want. Info can be found on the website geoparcominerariovalsessera.eu, where we also post maps of the various routes. There are four routes (loops) around the old sites where metal-bearing ores were mined. There are two archeo-metallurgical sites you can visit: Rondolere and Opificio, on the right bank of the Sessera, both accessible on foot from Casa del Pescatore, on the Panoramica Zegna road."

What did they mine?
“There were two types of ore here. The mixed sulfides yielded varying amounts of lead, copper, silver and gold. Profitability was based on being able to extract all these metals. These mines were never very profitable anyway. The 18th century documents we found talk about high costs and low revenues. These types of mineral were exploited above all in the Savoy period, since direct availability of metals was vitally important for the rulers of a state in the ascendant and their strategic necessities, i.e. making weapons and coining money. There weren’t many professionals around – 50 or 60 at the most – and in certain period the state of Savoy had to call in experts from Germany."

The other type of ore?
"Magnetite, ferrous oxide, even less profitable. This was exploited not by governments but private enterprise, as shown in a document from 1570 testifying to the transfer of the Rondolere mine by Duke Emanuele Filiberto to a lady-in-waiting.”

Rondolere is one of the most interesting sites, isn’t it?
"The blast furnace at Rondolere, though small, is highly interesting because, though only working from 1788 to 1804, it was converted from a traditional model to a French one that was more productive. Here you went from the ore to the finished product in just 200 meters. They produced pig iron, which was then treated, turned into steel and used to forge agricultural implements."

When was it at its height?
"In the mid-18th century. Production then began to decline, with mixed sulfides being abandoned in 1778 and iron in 1813."

What’s there to see at Rondolere?
"It was, as I said, an ironworks that processed magnetite from Pietra Bianca. We almost completely reconstructed a blast furnace and other plants. The value of this job is that we were able to compare historical documents with the remains on the ground."

And the Opificio on the right bank of the Sessera?
"This was on three levels, with a net floor area of around 400 square meters, comprising a crusher, a large wash plant with washing tanks and an assay furnace. The miners brought the ore, crushed it into a sand, washed it and then filled sacks that were loaded onto mules and taken to another site, downstream, near the Rifugio Piana del Ponte, where there was a foundry."

Why do visitors find the mining park so interesting?
"Because industrial archeology is something people really identify with. We’ve all got some forebear who was a blacksmith or maybe a mountain dweller. It’s the kind of archeology that speaks about day to day work, making things, so it’s very close to our experience, especially in an industrious place like the Biella area. Work is something people are interested in, as Primo Levi showed in his La chiave a stella, which speaks about the pleasures of working hard."