The sky outside your room: discovering Venus and the supermoon

Astrophysicist Fabio Peri’s tips for observing celestial bodies from your balcony. And hopefully a comet in May

Dazzling Venus, the magic supermoon, Orion and its belt. And perhaps the comet Atlas with its tail (but this is only a hypothesis). The sky in spring is spectacular. Even seen from your balcony or windows at home. You have to know what to look for though. And where. Our guide on this stellar safari is Fabio Peri, astrophysicist and scientific director of Milan’s Planetarium. Open your windows a little after dusk, switch off the lights and take all the time it takes.

Fabio Peri, isn’t hunting stars from home, in a city maybe, just wishful thinking?
“No. We are penalized though by luminous pollution, which only allows us to see 50 or so stars instead of the 3,000 visible to the naked eye in an uncontaminated place like Oasi Zegna. You’re obviously in a better position if you have a top-floor terrace and therefore a clear horizon. But we can all get some degree of satisfaction here. And let’s hope we see the comet.” 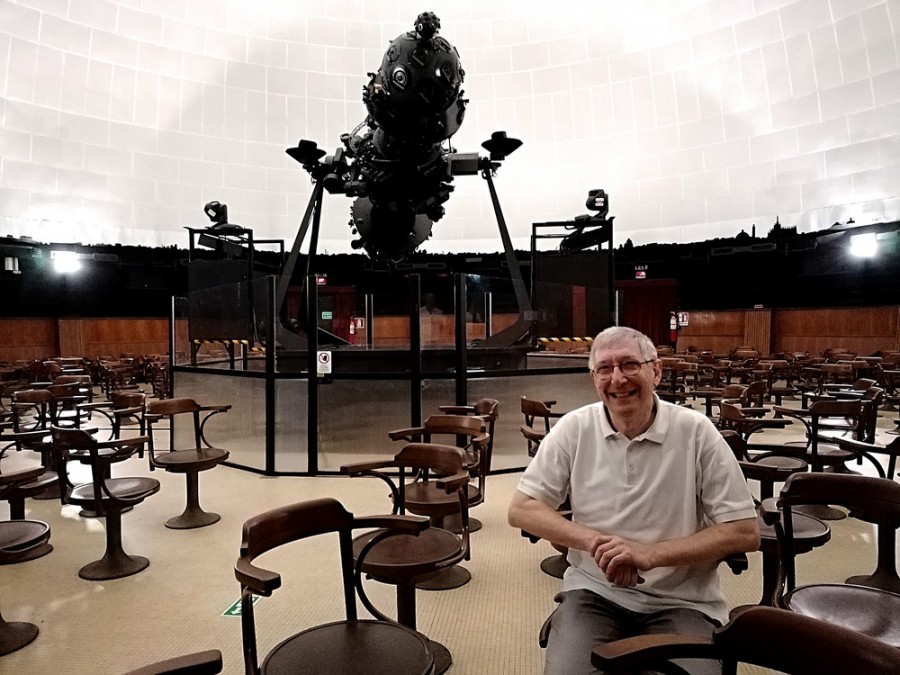 Fabio Peri, scientific director of Milan’s Planetarium
Could we really see a comet?
“It’s called Atlas. We’re all hoping that, after passing behind the sun in the early days of May, it will also become visible to the naked eye. We’ve been waiting since ’97, when Hale-Bopp went by. But comets are unpredictable.”

Few people have a telescope. Any tips for sharpening our vision?
“A pair of normal binoculars is enough. Or the zoom of a camera, another good way to enlarge the view. You can also play some amusing games with a camera, such as aiming at the Pole Star, the only one that stays put in the sky all night, and with a half hour exposure time, get a shot of the stationary star and a streak of light around it produced by other stars in motion.”

What does the April sky offer us?
“Certainly Venus, easy to find. If you look west around half an hour after sunset, you’ll see a very bright spot: that’s Venus, the planet that in this period is our evening star. It shines like that because it’s close to the sun. At other times of the year, on the other hand, it acts as our morning star. To the left of Venus, we have Aldebaran, which in the imagination of the ancients was the eye of the Bull charging the giant Orion, another constellation that’s also visible from Milan, like the three stars in a line forming his belt. If we follow these three stars in the belt, sloping slightly downwards, we find Sirius, the brightest star in our sky.”

The moon is another big attraction, isn’t it?
“Yes, it’ll be full on Wednesday 8 April. And it will be special, because it will also be at its perigeum, the point on its orbit closest to Earth. So it’ll be a supermoon, 10% bigger than usual.”

Good news for lovers of the night sky then…
“But that’s not all. Early risers might like to set their alarms to 4 in the morning and go hunting for three planets: Jupiter, Saturn and Mars, though the latter will be more difficult to see. You find them in a row, if you look east. You’ll see them shining but you’ll know they’re planets because their light is steady, whereas stars sparkle, flicker. Around 13 or 14 April, it will be even easier to make out Jupiter because it will be close to the moon. In that part of the sky we’re also starting to see the constellations that will accompany us during the summer. The brightest is Vega.”

Getting back to us, let’s finish our spin round the sky.
“This is the best period for seeing the Big Dipper. If we look straight up and a little to the north, we’ll see it, because it’s high in the sky. We can now go for the Pole Star. The Dipper is formed by seven stars: if we take the outside ones on the short side and extend an ideal line towards the horizon, this will lead us to a little star that’s not too bright, and that’s it, the only star that stays put all night, while the Big Dipper turns around it as the hours go by.”